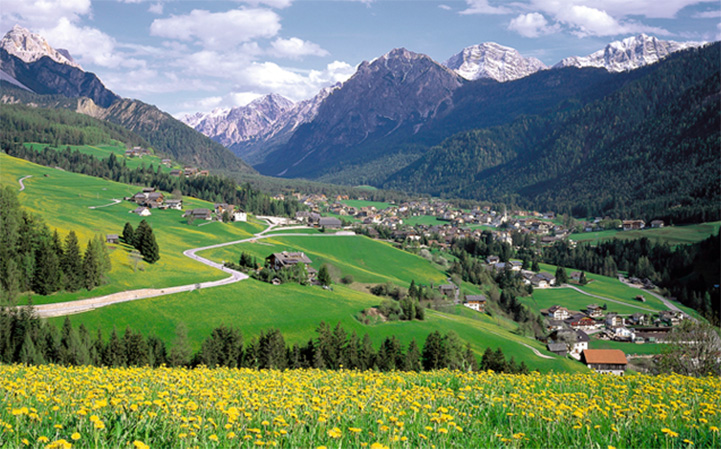 The statute of 1948 which granted autonomy to the provinces of Trento and Bozen had little effect on the Ladin question. Despite this reality and the other difficulties of the post war period, the Ladin unions continued to work with determination and idealism. In March 1949 Salvester Erlacher (1910-1991) brought out the first edition of Nos Ladins.

At first it came out monthly, but then fortnightly. Initially the unions of Gherdëina and Badia and the Union Generela supported the periodical without a direct editorial role, but in1972 the Union Generela di Ladins dla Dolomites took over complete responsibility. It was renamed La Usc di Ladins (the voice of the Ladins) and appeared monthly until 1985, then fortnightly until 1990, and on 1st February 1990 it became a weekly. Since May 2007 it has also been available on line at: www.lauscdiladins.com 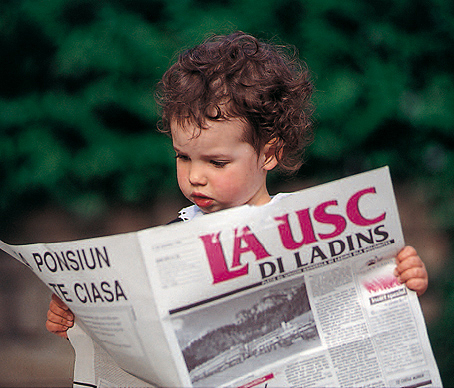 The Union Generela has always backed radio programmes in Ladin. At first they were experimental and lasted only a few minutes, then in 1955 they became longer, and a regular fixture from Monday to Saturday. In 1958 an organisation called Comité Radio Ladin was created in Gherdëina with a view to improving the broadcasts.

In 1961 the air time increased again and in addition to the usual news bullitens a cultural programme called “Dai Creps dl Sela” (from the Sela mountains) was created. Full time staff were taken on. In 1976, showing a united front, the Union di Ladins de Fascia and the Union Generela managed to block an attempt to remove the Fascia team from the RAI Bozen office, and relocate them in the Trento office.

The first TV programmes in Ladin were broadcast in 1979, but they didn’t become regular until 1988.

These days the RAI (Italian state TV and radio) offers 352 hours of radio programmes and 39 hours of television per year, in the provinces of Trento and Bozen. The Ladins of Anpezo and Fodom are unable to access this service, and so the Union Generela is striving for television repeaters to be installed to make this possible. 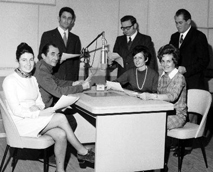 The members of the Union Generela have lost count of the number of times they have been to Rome to demand recognition for the Ladin unity and to obtain directly from the Italian premier the financial support they require, rather than having to go cap in hand to the various provinces and regions to drum up funds. They have also been active in all the phases of the instigation of Bozen’s autonomy, demanding recognition for the Ladin language, and more radio and TV airtime. In 1984 Ladin TV still didn’t exist, and the Ladins still didn’t have the right to hold local authority meetings in the Ladin language. In the 1980s the Generela was demanding: 3 hours of radio each day, and 2 hours of TV per week, and an independent editorial staff, to be able to offer a service of radio and television in all of the Ladin area, including Fodom and Anpezo.

The Ladin language was first recognised as the official language of the local authorities with the law 574/88 and came into force in 1989. The same rights were granted in Fascia in 1993. 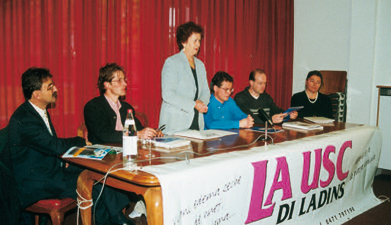 Once Ladin was adopted as the official administrative language, the need for a unified written language began to be felt more urgently. In 1988 the two Ladin cultural institutes “Micurà de Rü” and “Majon di Fascegn” asked the Swiss professor Heinrich Schmid to set out the criteria for the creation of a written “lingua franca”. A few years previously Schmid had proposed the rules for Rumantsch Grischun, the unified language of the Canton Grisons, in Switzerland, and after only a few years this written language was enjoying a notable success.

After examining various options, in conjunction with numerous representatives of the Ladin cultural institues, the professor decided to apply the same system as the one used for Rumantsch Grischun, and the new language was named Ladin Dolomitan.

The system adopted is based on a few fundamental principles, most importantly the frequency with which a word appears in the various idioms. Where this system failed to give a result, then a second set of criteria came into play, involving purely linguistic requirements, alongside socio-cultural aspects such as clarity, functionality, acceptance by the prospective users and last, but by no means least, originality.

This process was not applied in a mechanical way, but with feeling and respect for traditions.

In 1994 the Union Generela together with the Ladin Cultural Institute “Majon di Fascegn” set up the SPELL organisation: Servisc de Planificazion y Elaborazion dl Lingaz Ladin (service for planning and elaboration of the Ladin language). In 1997 the Ladin Institute “Micurà de Rü” and the Ladin teacher training institute in Bozen joined in the effort. At first the script was called “Ladin Dolomitan” but later came to be known as “Ladin Standard”. The publication of the “Gramatica del Ladin Standard” in 2001 marked first hurdle for the team, followed by the “Dizionar dl Ladin Standard” in 2002.

The Union Generela has its own linguistic department which deals with this project. Ladin Standard is the official language of the Union Generela. The provinces and the regions have yet to officially approve it.